You are here: Home / Christian Life / Actually act on what you know 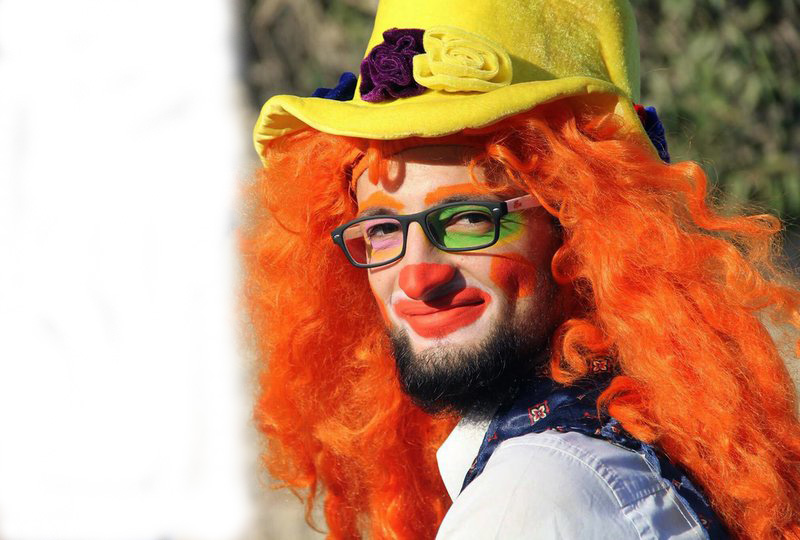 “…act upon the knowledge of faith….”  – Francis Schaeffer in his book, True Spirituality.  Quoted here by Andrée Seu Peterson in her World Magazine article (in 4th paragraph):  The power of now …Call forth what’s yours with no double-mindedness.

*Featured 2016 photo is Al-Basha, a Christian in Syria who acted on his beliefs – and was killed on Tuesday, Nov. 29, 2016 in a presumed Assad regime government or Russian ballistic missile strike on the Mashhad neighborhood in the besieged eastern side of Aleppo city.  He dressed as a clown to serve children — for Christ. Al-Basha was a center director at Space for Hope, a local Christian initiative serving for Christ in Syria’s war-torn opposition areas.  – Photo by Ahmad al-Khatib, a media activist in Aleppo in 2016.

What do you know about your faith in Christ?  I ask myself:

Self:  Are you actually acting on it… acting on your faith?  Are you purposely stepping out upon the stepping stones of faith as you make your way along the pathway of your life?

It behooves each of us to review what we know of our faith in Christ, and reconnoiter 1 what’s up ahead – so we can make decisive decisions for our life. Lots of various factors bend and twist our pathway.  However: What’s ahead is often determined by what’s in your head!  Do you have your faith in the “on” position?!  Or is your head “off” often!

Ever hear this from your mommy or daddy, way back when?

“What on earth were you thinking!!?
What was going on in your head!?”

I sure did!  And I’ve repeated it to myself many a time. And probably said it to my kids a time or two.  (And as I read “the news” these days I still find myself saying those words – – about the people “acting out”, doing “acts” all around us in the world: “What on earth…!”)

So, to avoid that talking head in your head now, look out!  Look ahead.  Plan ahead.  Know what you believe.  Know what you have been granted in Christ.  Know the promises of God in the Bible.  And then, step-out!  Make decisive decisions of faith.  Do life purposely, not willy-nilly (Google it!).  Act on what you know.  We can actually be who we are.  We can actually act on what we say our faith is.

Example: How often have I murmured and complained about something… and THEN finally taken it to the Lord in prayer. Finally!  I had forgotten that stepping stone of my faith, “…in everything by prayer….”

Do not be anxious or worried
about anything,
but in everything
[every circumstance and situation]
by prayer and petition
with thanksgiving,
continue to
make your [specific] requests known
to God.
– Philippians 4:6

And don’t forget the “with thanksgiving” part!  If we are giving thanks to God — it’s harder to be anxious and worried, and it’s easier to actually act on what we know!

In her article, The power of now, Andrée Seu Peterson goes on to say,

Let me be plain: I have come to the conclusion that no one ever lived the Christian life “in general,” or by faith in the abstract. No one ever laid hold of the benefits in Christ except by believing Him in this present moment.

This is strenuous and conscious and constant believing. The kingdom of God comes and “the violent take it by force [“as a precious prize” – AMP version]” (Matthew 11: verse 12). They sue for grace. They say, like Jacob, “I won’t let you go until you bless me.” They ransack God’s Word for promises.

They believe them like a 5-year-old and not like a sophisticate. They prefer the plain meaning to the obscurantist theology of unbelief. They call forth what’s theirs in Christ without double-mindedness.

Jesus said, “…wisdom is justified and vindicated by her deeds [in the lives of those who respond to Me].” (– Matthew 11: the end of verse 19)  It is not our expressed faith that counts in the end — but rather, our deeds that are done because of what we believe in our heart.  It could be said, “We need to do our hearts….”  Little is it worth to just speak-out our heart.  Our life is of much more value if we actually “act out our heart”.

Is there much coming out of your head (beliefs) besides a lot of noise (talk)?!

“…act upon the knowledge of faith….“  – Francis Schaeffer

Note:
1 – Reconnoiter: make a military observation of (a region): “they reconnoitered the beach some weeks before the landing”; synonyms:  survey, make a reconnaissance of, explore; investigate, examine, scrutinize, inspect, observe, take a look at; patrol; informal check out, scope out, recon “two of our best pilots were sent in to reconnoiter the area”  – Google Search